Simple living is complex, because our society has made it complex. What should we do about it?

The reason I’m so concerned about simple living, even though it’s tricky to define and almost impossible to practice, is that consumerism is destroying the planet on multiple fronts. We need simple living, on a massive scale — and especially in the advanced industrial countries — to save the ecosystems that support the existence of all animals on the planet. And no, veganism is not enough. If we keep burning coal, driving cars, and overpopulating the earth, veganism will just slow down, but not stop, the destruction.

We need social and political changes, but all such measures, such as a tough climate change treaty, founder on a basic point; it’s “bad for the economy.” If this climate treaty actually worked, rather than just being more hot air, it would have the effect of reducing consumption. This should not be surprising. Some people still hold on to the idea of “green growth,” but that’s an evasion of an inevitable environmental reality. You can have a growth economy, or you can have an effective climate treaty, but not both. Take your pick.

Nobody wants to hear that we have to live on less. This is why it is unlikely that we will do anything about climate change (or anything else) until it is quite clear that such measures are absolutely necessary. So we need two things: we need fundamental changes in our values along the lines of “simple living,” and then we need a social and political revolution to make these values universal.

A similar dilemma arose many millennia ago. Karl Jaspers referred to the period from about 800 BCE to 200 BCE as the Axial Age. This was the age of Buddha, Isaiah, Pythagoras, Confucius, and Lao Tzu. Revolutionary new ethical principles were developed at widely disparate parts of the globe at about the same time. 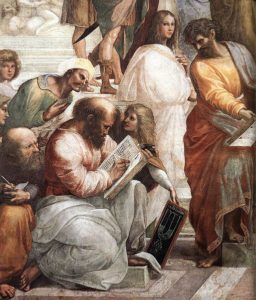 Pythagoras in “The School of Athens”

It’s hard for us to imagine today, but the basic ethical principles of all of our religions and secular societies — ideas like “do not steal” — were quite controversial some 2500 years ago. While the idea of not stealing from your relatives or from others in your tribe would have been well accepted, the idea of not stealing at all would have been revolutionary. “Wait a minute! You mean you don’t want us to steal even from people who aren’t related to us or known to us? What will happen to our raiding parties?”

The Axial Age was not just an ethical revolution, it was a social revolution as well, as these ethical principles made possible a new kind of culture and society. Today, “not stealing” is intuitive and obvious. It is so obvious, that “not stealing” is considered an ethical or moral idea, not a social or political idea. But this moral idea is a pillar of our whole social and political system.

If there was not a basic moral consensus on the idea of “not stealing,” even from people who are not your relatives or friends, our modern societies would collapse into a network of tribalism. From time to time, these standards do fail, but we refer to it as “corruption” or “nepotism,” as if some people reverted to an older, more primitive tribal morality.

The principle of simple living involves our relationship with the non-human life on the planet as well as with other humans. Many of the great Axial Age teachers such as Pythagoras and the Buddha already saw that the principles of “not stealing” and “not killing” extended beyond the human realm, but this insight was mostly lost in the great rush of advancing civilization.

We need a new Axial Age. We need to let simple living, or something like it, take hold of our civilization and reshape it in ways that are just as significant as those brought about by the first Axial Age over two millennia ago. How we do that is anyone’s guess, but the crisis is upon us: we are staring the collapse of industrial civilization right in the face.