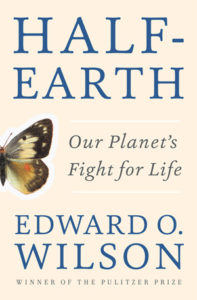 What would it look like if we really gave half of the earth’s surface for wilderness, as Edward Wilson proposes in his book Half-Earth? What does “committing half of the planet’s surface to nature” (Half-Earth, p. 3) actually mean?

This is quite far-reaching, but it’s also ambiguous, and here is where I begin to get a bit nervous.  I presume that Wilson is talking about half of the land surface.  But which half of the planet do humans get, and which half does the non-human domain get?  If it is done strictly by area, we have to account for the fact that humans have already given themselves much of the biologically productive areas on the planet.  Translation: agricultural areas, plus many of those areas where we have built our cities and towns, typically close by to agricultural areas.

If we are going to start by allocating Greenland, Antarctica, and the Sahara Desert for “nature,” then I suspect that this “half earth” proposal is an empty formality.  It’s just going to duplicate the current out-of-balance situation where humans are on top and wilderness gets the leftovers. Obviously, many of the areas we do not occupy are some of the most desolate on earth, not suitable for domestic animals or wildlife. 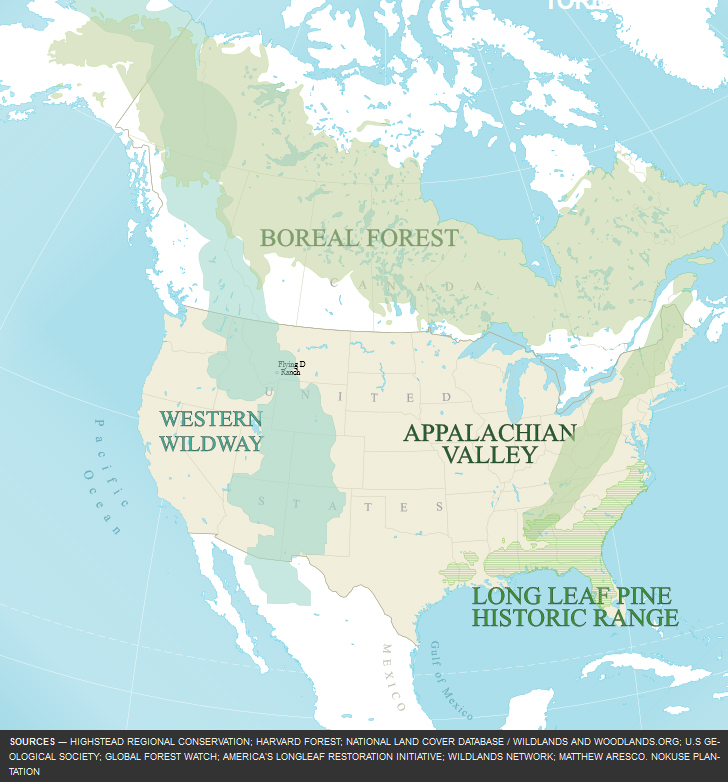 The above map in Smithsonian magazine, September 2014 shows specific areas Wilson would like to preserve in the United States and Canada. It’s not clear, by the way, that Wilson or anyone else intended to turn over the shaded areas in the map  to “nature.”  More likely, it’s possible that these are simply maps of where the ecosystems that Wilson wants to preserve are found.

But hey, let’s just suppose we tried to do this.  What if we were to just turn over the shaded areas to nature?  It would be quite radical, and it’s certainly a lot more wilderness than we have now.  The shaded areas entirely subsume the place where I grew up (Oak Ridge) and the place where my parents live (Chattanooga), and over half of my adopted home state of Colorado, so we are displacing quite a few people here.  The section in the coastal regions of the southeastern U. S. takes out Mobile, Tallahassee, Jacksonville, Savannah, and Charleston.

Yet despite this radicalism, the deck still seems to be somewhat stacked against “nature” here.  A hefty portion of the area devoted to “nature” is in far northern Canada.  And I question how well this model could be applied to Africa and Asia, which are much more densely populated than North America.  We’ll probably wind up giving the Gobi Desert to “nature” and displacing some unhappy Chinese. If we take this defensive approach, wilderness is probably going to wind up getting the short end of the stick and there will be a lot of unhappy humans.

I would suggest a different approach. Just get rid of all livestock agriculture and allocate those lands to wilderness.  There is one key advantage to land currently occupied by livestock: we know there are no humans there except for the occasional cowboy camping out underneath the stars.

How far does this get us?  Out of the total land area of about 148 million km2, approximately 44 million km2 is permanently covered with ice or lacks topsoil (Antarctica, the Sahara Desert, etc.).  This means that we have about 104 million km2 that’s actually worth arguing over.  Then we look at agricultural land, which is about half of the remainder.  Currently, of the 51 million km2 of total agricultural land probably about 40 million km2 goes for livestock.  This is mostly grazing land but also quite a bit of cropland. We could allocate some additional cropland to grow crops to replace the calories formerly provided by meat, but that still gives wilderness over 1/3, we’ve displaced almost no humans, and we haven’t even really raised a sweat.  Throw in most of the Amazon, the ice-free portions of northern Canada and northern Siberia, and let the penguins have Antarctica,  and we can call it a day.

So how hard was that?  All right, it’s not quite that simple.  The wilderness areas ideally need to be connected.  We might want to take some positive steps to defend and protect specific ecosystems not currently utilized by livestock agriculture, perhaps along the lines of the national parks and wilderness areas, or the areas identified in the map (above) or the ecosystems named in Chapter 15 of Half-Earth. 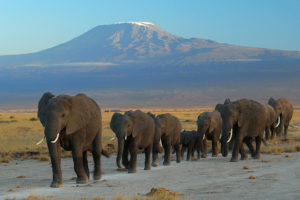 We might also want to “rewild” the American wilderness areas to resemble, ecologically, the state of wilderness before any human contact.  Over 2/3 of the wild large animal species in North America went extinct after the initial human contact about 11,000 years ago, including mammoths, mastodons, the saber-toothed tiger, dire wolf, giant sloth, and American species related to the horse and the camel. Human overhunting was the primary cause of this. To “rewild” America, we might want to import some threatened species from Africa and Asia, such as elephants, as their relatives the mammoths and mastodons are now extinct.  We could isolate the human cities and towns and connect them with roads, allowing wildlife to pass over or under the roads.

With or without the reduction in human population, this would have at least two other environmental advantages, besides solving or greatly alleviating the extinction crisis.

(1) Climate change. Sailesh Rao and his colleagues have estimated that by reverting lands currently supporting livestock to their natural vegetation, new forests would grow that would, over a period of decades, take out most or all of the carbon added to the atmosphere since the industrial revolution began.

(2) Soil erosion. Standard agricultural practices currently erode land about 10–20 times faster than the natural rate of soil formation. The land allocated to nature could be a cropland reserve, so that as old “tired” soil needs to be taken out of circulation (and reverted to wilderness), it could be replaced by land from the wilderness category.

We really cannot meaningfully address the extinction crisis without addressing livestock agriculture.  Wake up, people: the entire planet is overrun with livestock, which is the reason we have a problem with habitat destruction, the leading cause of extinctions.  Well over 90% of the megafauna biomass of the planet is humans, their livestock, and their pets.  The “half-earth” proposal, if it were to follow the obvious path of eliminating livestock agriculture, could address multiple environmental problems at the same time.