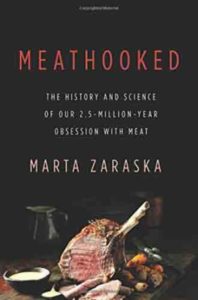 Meathooked: The History and Science of our 2.5-Million-Year Obsession with Meat. By Marta Zaraska. Basic Books, 2016.

A well-written and informative book, even when one doesn’t completely agree with it, is easy to review. This book fills the bill. Thank you, Marta Zaraska, for keeping us up to snuff on the issues. She also manages not to upset anyone, steering away from nasty little confrontations with vegetarian sensibilities. So, vegetarians, you can relax; your ethical sensibilities will not be sullied.

Zaraska, a freelance science journalist, provides the flip side of the “why are you vegetarian?” discussion — “why do you eat meat?” The author isn’t looking for, or trying to dissect, rational arguments for meat-eating — she’s just looking for an explanation or a cause for this behavior. Why do people eat meat, when there are so many obvious problems with meat consumption, such as disease, animal suffering, expense, and so forth? Zaraska’s answer is two-fold, addressing both (1) how meat-eating got started and then (2) how it was perpetuated thereafter.

How it got started was not about “keeping stomachs full,” but “about showing off, politics, and sex” (p. 27) in early hunter-gatherer societies. Then after it was established, it was perpetuated through a variety of different ways. The first and perhaps most important is just that it tasted good; because of “meat hunger,” the taste of meat, or “umami” (something not unique to meat, but which meat has in abundance). Then there’s advertising, the symbolism of meat, tradition, and status. There may also be a biological component; perhaps we inherit our tastes, literally and biologically, from our parents, as well as through the more obvious methods of socialization.

This book provides an interesting contrast to Melanie Joy’s well-known and influential book Why We Love Dogs, Eat Pigs, and Wear Cows. Joy’s explanation is that we have a belief system that enables us to eat some animals but not others, which she calls “carnism.” Joy is less interested in the empirical reasons why we eat meat, but why, in today’s society, it isn’t even an issue and doesn’t rise to the level of conscious awareness. “We don’t see meat-eating . . . as a choice . . . we see it as a given, as the ‘natural’ thing to do,” says Joy (p. 29).

This isn’t good enough for Zaraska. Zaraska does discuss the ideological component that Joy dwells on; that’s where tradition, status, and symbolism come in. But where does this ideology come from? Zaraska is more interested in why and how this system got established and why and how it is perpetuated — the scientific question of how we got to be meat-eaters (which Melanie Joy never addresses), and why, once we became meat-eaters, we stayed that way. So this is a broader and more complete approach to the subject.

My major concern about the book is that even though it is entertaining, informative, and well-written, Zaraska hasn’t completely answered the question of why we eat meat. She has answered the second part of the question pretty well — how and why meat-eating was perpetuated, once it was established. What is not quite as clear is how meat-eating got started. Zaraska takes this practice back 2.5 million years, so we are talking about going back even before homo sapiens to our immediate predecessors homo erectus and homo habilis. Yes, there was certainly some “showing off, politics, and sex” involved, but is that it?

I don’t think this completely explains why and how it got started. Suppose that hunting were not energy-efficient relative to gathering plants. It’s great that meat tastes good, but if it takes any substantial additional energy to acquire your calories by hunting animals, I doubt that humans would have done it. They might have done so opportunistically, and thus scavenged from kills of the larger predators like lions and tigers, but I don’t think taste alone (which is malleable anyway) would have been a sufficient incentive. If some tribes did hunt for food anyway, they would have been out-competed by other tribes that used the presumably more efficient method of gathering plants.

I’d return to an earlier hypothesis which Zaraska rejects, that it was about feeding people. Meat-eating was about keeping stomachs full. Hunting was the quickest, most energy-efficient way to keep those stomachs full. In energy terms, it was easier to kill something than to grow or gather something. That’s why hunting spread as an early human strategy. Once they had figured out spears and fire, humans had a unique strategy that enabled them to dominate any food scene that they entered. Tribes that survived by hunting had a lot of surplus time and energy, which could then be used to solve other problems.

And humans did indeed dominate the early food scene. We know that early humans ate meat because of human overhunting. No, primitive human hunters were not “in balance with nature.” The animals they hunted (or competed with for habitat) were driven to extinction. Eventually, this hunting strategy exhausted itself; humans hunted all the easy-to-get animals to extinction, which explains the wave of large-animal extinctions that followed every place that humans went.

In Africa and Eurasia, 20-30% of all megafauna species went extinct after humans acquired this technology. In Australia, North America, and South America, it was even worse; over 2/3 of all megafauna species were rendered extinct in a relatively short period of time after humans appeared on the scene. After these extinctions, humans had no choice but to develop agriculture, a different and much more time-intensive food strategy.

Minor complaints: when she tries to explain protein, she says that beans do not have methionine (p. 47). Oh yes, they do. Didn’t Neal Barnard (who wrote a glowing endorsement of the book) tell you that? Another minor complaint: her discussion of Jesus’ vegetarianism can only invoke Robert Eisenman (p. 123), whose bizarre ideas about the Jesus movement (making Jesus into a militarist advocating violence against the Romans) have convinced almost no one. What about my books The Lost Religion of Jesus and Disciples, what about Hans-Joachim Schoeps and Jewish Christianity: Factional Disputes in the Early Church, and what about the vegetarianism of the Ebionites and the pseudo-Clementine literature?

This was a good book and a great discussion-starter for vegetarians. It really adds to the literature about vegetarianism by approaching the question, “why do we eat meat?”, from the viewpoint of an “outsider” to the usual milieu of vegan or vegetarian thinking.