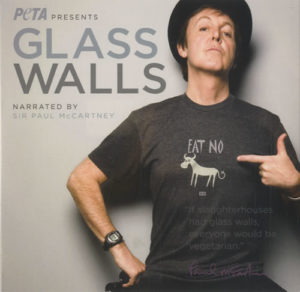 This question is complex and tougher than it sounds. This is not about slaughterhouses literally having glass walls, but about the fact of animal suffering in slaughterhouses being apparent to everyone. We need to imagine something like a “slaughter cam” with cameras pointing at the killing floor in all slaughterhouses, with video available for free on the internet and in public libraries.

There is a widespread assumption implicit in most vegetarian campaigns that if people really understood what was going on in a slaughterhouse, they would go vegetarian or at least want to go vegetarian. All we have to do is provide the necessary information to enable them to make the transition. Interestingly, the meat industry seems to share this assumption; they try to suppress this information by making it more difficult for animal activists to get inside slaughterhouses and video what is going on.

But this assumption really means that humans are naturally compassionate to animals, and so are naturally vegetarian. That humans naturally feel compassion for animals is a significant and debatable point worthy of some further discussion. Michael Pollan would deny it, but it explains the whole animal rights debate and why the meat industry is so concerned with the spread of information about slaughterhouses.

If slaughterhouses really had glass walls (literally or metaphorically), it isn’t obvious what the impact would be. Not everyone who acquires this knowledge about slaughterhouses responds in the same way. A husband and wife will sit down to watch Earthlings; the wife may go vegan, but the husband will demur. Slaughterhouse workers are obviously very aware of what happens to animals, but most slaughterhouse workers don’t become vegetarians. Open-air meat markets in some countries clearly indicate the reality of the death of animals, yet people in these countries eat meat. How do we account for these different responses?

Humans seem to instinctively resist the killing of animals. Those who eat meat despite knowing where it comes from have become desensitized to killing, or are evading or rationalizing this fact in various ways. Meat-eaters are in fact what Carol Adams calls “blocked vegetarians.” If slaughterhouses had glass walls, people could still eat meat and block out the implications — but it would be a lot more difficult to do so.

Blocking is probably not necessary for sociopaths or psychopaths, or people who have certain kinds of anti-social personality disorders, who literally feel no sympathy for others, human or animals. However, for the rest of us, it would seem that the blocking process is necessary in order to eat meat. Both the information campaigns of animal liberation activists and the counter-narratives spun by the livestock industry are responding to the same dynamic.

There are other costs here besides increased advertising or political burdens for the meat industry. Because humans have an instinctual resistance to violence (either against other humans or other animals), the legitimization of the slaughter of animals creates societal costs. The most obvious costs are the effects of slaughter on slaughterhouse workers.

Violence has an effect not only on the victim, but on the perpetrator, even (and especially) when this violence is socially sanctioned, the phenomenon of “perpetration-induced traumatic stress” or PITS, described by social psychologist Dr. Rachel MacNair. This happens in the case of soldiers who kill in wartime, police officers, executioners, animal shelter workers who have to euthanize unwanted animals, and slaughterhouse workers.

These people often feel ongoing stress from having to participate in acts of violence. The stress of having to kill animals is a key reason that the turnover rates in slaughterhouses are so high. Society approves of this killing, but human instincts regard it as a deeply repugnant act. To maintain this arrangement it’s best just not to talk about or draw attention to this contradiction, but to repress awareness of it. Low pay and the high injury rates for slaughterhouse workers are also key factors, but even these aspects are related to the need to conceal the realities of slaughter from the rest of society.

The effect of giving this social approval to violence is, obviously, that it encourages violence. Primitive humans hunted animals extensively, and this is sometimes cited as evidence that killing animals is natural. However, as author and psychologist Steven Pinker documents in The Better Angels of Our Nature: Why Violence Has Declined, such primitive societies were also very violent with respect to other humans.

As societies have advanced, two things have happened simultaneously: (1) the fact of animal slaughter has become more and more distant from the ordinary workings of society, and (2) levels of human violence against humans have steadily and dramatically declined. This doesn’t prove that these two phenomena are necessarily related, but it is very suggestive. Instead of killing being a communal activity, as in primitive hunter-gatherer societies, killing animals became a more specialized occupation increasingly segregated from other occupations. Today it is a private occupation that is almost never discussed and to which access is strictly regulated.

At the same time, crime rates have fallen and wars have become less frequent — a key point in The Better Angels of Our Nature. Part of the reason for this decline in violence against humans, I would argue, is that we are not exposed to nearly as much violence in the first place. The saying attributed to Tolstoy, “as long as there are slaughterhouses, there will be battlefields,” is quite appropriate here.

So if slaughterhouses had glass walls, would we all become vegetarian? Not necessarily, but it would certainly help. What the glass walls would really do would be to raise the societal costs of slaughtering animals. The trauma of violence is something that once unleashed, can be to a certain extent contained and repressed, but never completely disappears. Bringing this violence to light is an essential component in ending it.

8 thoughts on “If slaughterhouses had glass walls”