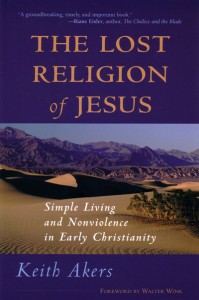 [The following article by Keith Akers was published in The Ark, No. 234, Autumn/Winter 2016 issue. The Ark is the publication of the Catholic Concern for Animals.]

Is vegetarianism part of Christianity, or are they incompatible? Christianity and vegetarianism don’t have to be in competition, but in practice they are. While many become vegetarians for health reasons, the heart of vegetarianism is its ethical component — the practice of not eating meat out of concern for the suffering of animals.

People who become vegetarians often speak of their “conversion” to vegetarianism, precisely because of this ethical component in their dietary practice. They come to realize that animals have feelings and that we should not kill them unnecessarily. Communicating this ethical concern to the outside world, though, is often difficult. Christian vegetarians find themselves in the odd position of sharing a central part of their lives with the Buddhist, or Jewish, or secular vegetarian, that they don’t share with their own religious community.

Christianity, beginning with Paul, has largely rejected the idea that it is wrong to eat meat, and regarded ethical vegetarianism as a competing idea. If I, as a Christian, become vegetarian because I feel it is wrong to kill animals or eat meat, what incentive do I have to continue supporting a Christian community which, at best, is going to have grudging tolerance for my vegetarianism, and at worst, will be actively hostile to an ethical precept which is central to my life?

It was not always this way. Early church writers such as Jerome, Basil the Great, Origen, Tertullian, and Clement of Alexandria were all vegetarians; all the apostles abstained from meat and wine (Eusebius, Proof of the Gospel 3.5), and vegetarians were “without number” in the early church (St. Augustine, Of the Morals of the Catholic Church 33).

Motivation is critical here. Ethical vegetarianism is the very first heresy, and Paul’s words have been quoted ever since then against “heretical” vegetarians: “the weak man [weak in faith, that is] eats only vegetables” (Romans 14:2). St. Augustine condemned the vegetarian Manicheans, and in the Middle Ages the Albigensian crusade specifically targeted vegetarians; suspected heretics would be given an animal to kill, and if they refused, they were judged to be heretics.

The example of Jesus is critical here. If Jesus ate meat, then while we are not obligated to eat meat, it cannot be wrong to eat meat. And this means that ethical vegetarianism — the idea that eating meat is wrong — is a heresy. Is there a way to avoid this conflict?

Both sides in this dispute seem to have influenced the writing of the gospels. Jesus distributes bread and fish to the multitudes, or even eats fish; but Jesus also advocates kindness to animals and attacks the animal sacrifice business in the temple.

We can gain some insight by going back to the original controversy concerning ethical vegetarianism described in Paul’s letters, which are decades earlier than any of the gospels. Paul is in a dispute with vegetarians in the early church and believes that it is perfectly all right to eat meat.

Eat whatever is sold in the meat market without raising any question on the ground of conscience. (I Corinthians 10:25)

At the same time Paul counsels diplomacy in dealing with the vegetarians who think otherwise, and taking care not to offend them:

It is right not to eat meat or drink wine or do anything that makes your brother stumble (Romans 14:21).

Jesus and James were vegetarians

This controversy makes no sense at all unless Jesus was a vegetarian. At the time that Paul wrote, many were still alive who had known the earthly Jesus, including James, Peter, and the other apostles and disciples. If Jesus had eaten meat, all Paul would have had to say was “it cannot be wrong to eat meat, since Christ himself ate meat.” But he doesn’t say this. In fact, to keep the peace, he becomes vegetarian himself. Why? Undoubtedly because it was well known that Jesus was a vegetarian, just like the apostles and James his brother.

The early Christian vegetarians that Paul talked about clearly were offended by the thought that other believers might sacrifice animals or eat meat; they believed that all followers of Jesus should be vegetarians. So who are these trouble-making vegetarians who must not be offended? Comparing the disputes over vegetarianism and animal sacrifice in Romans 14 and I Corinthians 8–10 with the murky food dispute in Galatians 2, it appears that these trouble-making vegetarians were the leaders of the early church — James, Peter, and John.

James the brother of Jesus, the first leader of the Jerusalem church after Jesus’ departure, was universally acknowledged to be a strict vegetarian, and in fact was raised as a vegetarian (Eusebius, Ecclesiastical History 2.23.5–6). Why would Jesus’ family raise James as a vegetarian, but not Jesus? The natural conclusion is that Jesus’ parents raised Jesus and James as vegetarians and that this was part of the original gospel message.

Later Jewish Christianity assumed that the vegetarian James was not just speaking for the church, but passing on the teaching of Jesus and the original Jerusalem church. In the gospel of the (Jewish Christian) Ebionites, Jesus indignantly rejects the Passover meat, teaches vegetarianism, and attacks animal sacrifice, saying “I have come to destroy the sacrifices, and unless you stop sacrificing [animals], my wrath will not cease against you” (Epiphanius, Panarion 30).

If Jesus had compassion for animals as part of his message, then that would explain why Jesus went into the temple and attacked what he found there.

In the temple he found those who were selling oxen and sheep and pigeons, and the money-changers at their business. And making a whip of cords, he drove them all, with the sheep and oxen, out of the temple; and he poured out the coins of the money-changers and overturned their tables. And he told those who sold the pigeons, “Take these things away; you shall not make my Father’s house a house of trade.” (John 2:14–16; parallels in Matthew 21:12–13, Mark 11:15–17, and Luke 19:45–46)

The animals which are being sold are sacrificial animals, and it is these dealers in animals whom Jesus attacked — chasing out the animals to be sacrificed, as well as those who were buying or selling them to be sacrificed. “Cleansing the temple” was an act of animal liberation. Jesus himself twice quoted the prophets when he said, “I desire mercy, not sacrifice” (Matthew 9:13, 12:7, quoting Hosea 6:6).

A Gospel Message for ALL Creation

Jesus was arrested and executed after a confrontation in the temple in which he disrupted the bloody animal sacrifice business. If Christianity is to become truly universal, it must come to grips with this all-inclusive tradition of kindness which stands at the very beginning of Christian history. The simplest solution is to make vegetarianism part of the gospel message. The good news is not just for humans, but for all creation.

9 thoughts on “Vegetarianism and Christianity — are they compatible?”