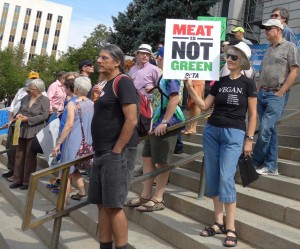 Here are the top 10 things to think about when considering the effect of food on the environment:

2. Livestock biomass today is greater than the TOTAL biomass of ALL other large animals on the planet (including humans) at any time during the last 100,000 years.
“Megafauna biomass tradeoff as a driver of Quaternary and future extinctions,” Anthony D. Barnosky, Proceedings of the National Academy of Sciences [PNAS], August 12, 2008, vol. 105 no. Supplement 1.

5. Soil, the basis of our human food supply, is eroding at a rate 10–20 times faster than the natural rate of soil formation in the United States and Europe. (Elsewhere in the world, soil erosion is even worse.)
David Pimentel and Michael Burgess, “Soil Erosion Threatens Food Production,” Agriculture 2013, 3(3): 443-463.

More resources:
Eat for the Planet, by Nil Zacharias and Gene Stone (Abrams, 2018). This short, non-technical book clearly explains the impact of food on the environment.

5 thoughts on “Food and the environment: Top 10 things to think about”