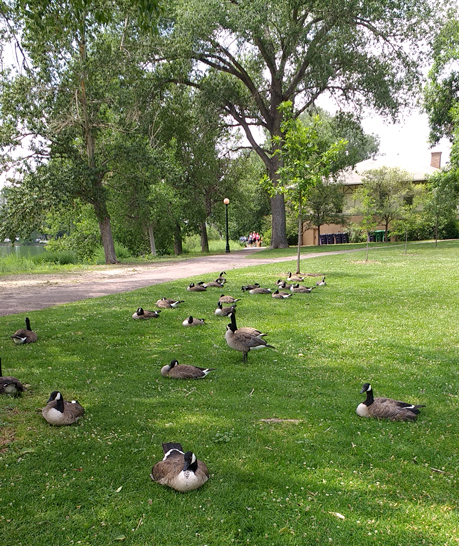 My response is—”what about water? What about living space? Where, exactly, do you think you’re living?” There’s already insufficient water and land for everything that people want to do in Colorado. The “goose problem,” at its heart, is about living space.

So actually, Flynn’s suggestions of “homelessness” and “affordable housing” as potential issues weren’t totally off the mark. He just needed to expand his query to include the entire city and the entire state. The geese in Washington Park are getting in the way, and some of our residents wanted them killed. The “kill the geese” faction seems to be winning right now. But with all of these issues, the core problem is, where are all the creatures of Colorado (human and otherwise) going to live? 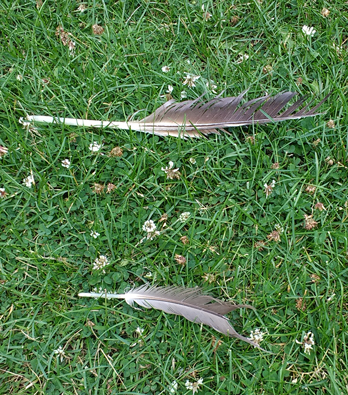 Those who were taken left behind some feathers.

This is probably the single most important issue for Denver to face, because it cuts to the heart of Denver’s future, and Colorado’s—and that’s before we even get to the ethics of killing innocent animals.

The underlying reason we have a goose problem is that there’s too many people and too many livestock. Humans and their livestock are already at least 20 times greater, by biomass, than ALL OTHER LARGE ANIMALS ON THE PLANET COMBINED. That’s all the elephants, giraffes, bison, deer, bears, and all other large animals. Even smaller animals are getting competition: nearly 75% of the birds on the planet (by biomass) are domesticated chickens, not wild ones like the ones you see in your backyard—or like Canada geese. And, lest there be any doubt, most of that “humans and their livestock” category is livestock, not humans. We’ve taken over virtually every square inch of the planet. It’s no wonder that we have an extinction crisis.

Denver’s water (diverted from the Western slope) seems fairly secure, but many communities are getting their water from aquifers which are depleting. And still people are coming to Colorado, despite the lack of living space and resources. The Boulder Daily Camera reported in August that the amount of natural land eliminated due to human activities in Colorado increased by 676,827 acres between 2001 and 2017 — to about 10% of the state, an area larger than Rocky Mountain National Park.

So it’s no wonder that Canada geese want to live in Washington Park. Where else, precisely, are they supposed to go?

Right now, our unstated but also unquestioned policy is just to expand Colorado’s population and economy indefinitely. Really? How do we think this is going to work? What are we going to do when the oil boom goes bust, as it inevitably will, and the jobs leave, and homelessness expands again? Our Colorado River, which supplies an entire bioregion downstream from us, is reduced to a trickle by the time it reaches the ocean. What are we going to do when the wells run dry, as they already have in parts of Texas, and when the river runs dry, as it already has for many of those downstream from us in the Colorado River basin?

The time of mindless economic expansion in Denver and Colorado is coming to a close, and sooner than we think. The reason we have a “goose problem” in the first place is our intent to mindlessly dominate nature everywhere in the state. We’ve previously killed off the natural predators of geese — the foxes and coyotes that were sometimes seen in Denver. And we’ve made the lakes in Washington Park attractive to geese, paradoxically, through its unnatural vegetation.

We could continue to kill the geese, along with everything else that gets in our way. Or, we could sit down and figure out a way to live with wildlife. The question is not so much “where are the Canada geese going to live?” The question is, where are WE going to live. This issue isn’t about geese; it’s about us.

2 thoughts on “Why geese in Denver is an important issue”