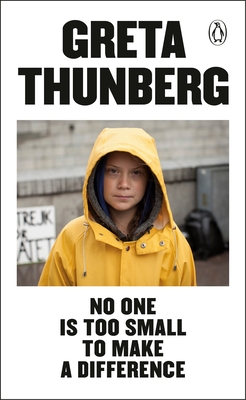 Last October 11, Greta Thunberg made an appearance in Denver. When she announced that she would not fly even to climate conferences, I despaired of ever being able to see her in person. And yet here she was, right in our own city, and we got to see her! I don’t remember exactly what she said. However, much of what she said was doubtless in this short book, which is a collection of her speeches.

It is well worth a look. When you read the whole thing through (at 108 pages, it’s not long), it is even more radical than you probably think of Greta Thunberg as being.

There is one quotation in particular that I recall from her remarks. It is from a talk she gave on May 28: “This is not primarily an opportunity to create new green jobs, new businesses, or green economic growth. This is above all an emergency, and not just any emergency. It is the biggest crisis that humanity has ever faced. This is not something you can like on Facebook.” (p. 70) 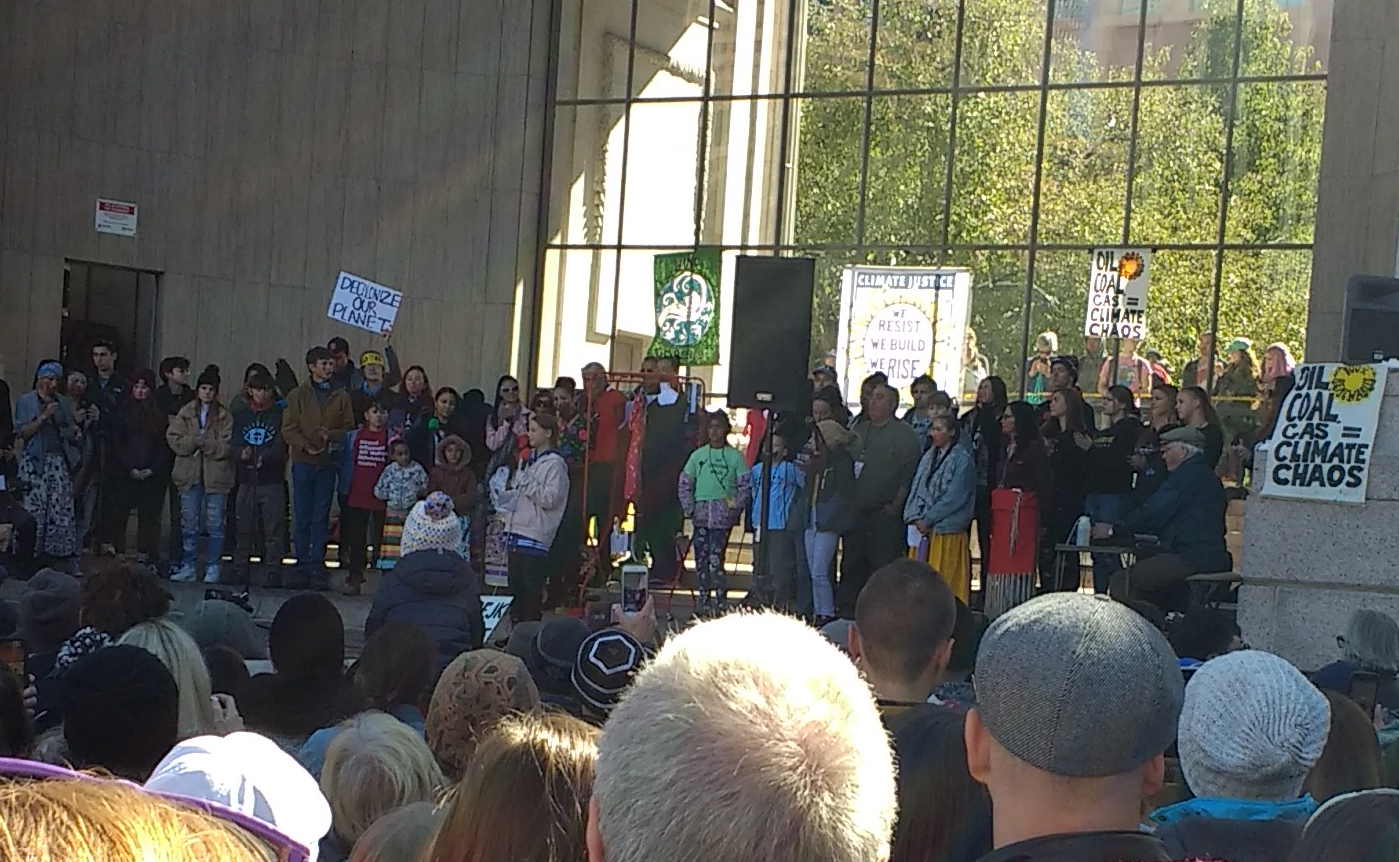 At one point during the rally, a group of people started chanting “Green New Deal! Green New Deal!” I hope that the proponents of a Green New Deal paid careful attention to these words. What Greta is about, above all, is honesty. It’s not that she’s necessarily against a Green New Deal. But it’s clear that she is critical of people advocating a “Green New Deal” as a way to address inequality and create jobs. It would be great if it did that, but that’s not the reason to do it. It’s also clear that she understands the problems of sulfate aerosols. “Nor do these [already ominous-sounding!] scientific calculations include already locked-in warming hidden by toxic air pollution” (p. 58). This is another problem with the Green New Deal: if it is somehow spectacularly successful, it will actually make global warming worse until some centuries pass and the carbon dioxide comes out of the air.

Honesty requires that we describe this as an emergency, but it also requires that we admit that we don’t necessarily have any “solutions”— but need to act anyway. “We have to start treating the crisis like a crisis—and act even if we don’t have all the solutions” (p. 64). In her book, no particular solutions (as we would customarily call them) are being put forward. She doesn’t call for a Green New Deal, action on renewables, or anything else. She just tells it like it is, and allows you to draw your own conclusions. We have about 11 years (actually, a bit over 10 years) until we pass tipping points that will flip the climate into a permanently hotter world that will take millennia to reverse. It is not some cult group of radical ecologists that is saying this, it’s the IPCC (the Intergovernmental Panel on Climate Change). 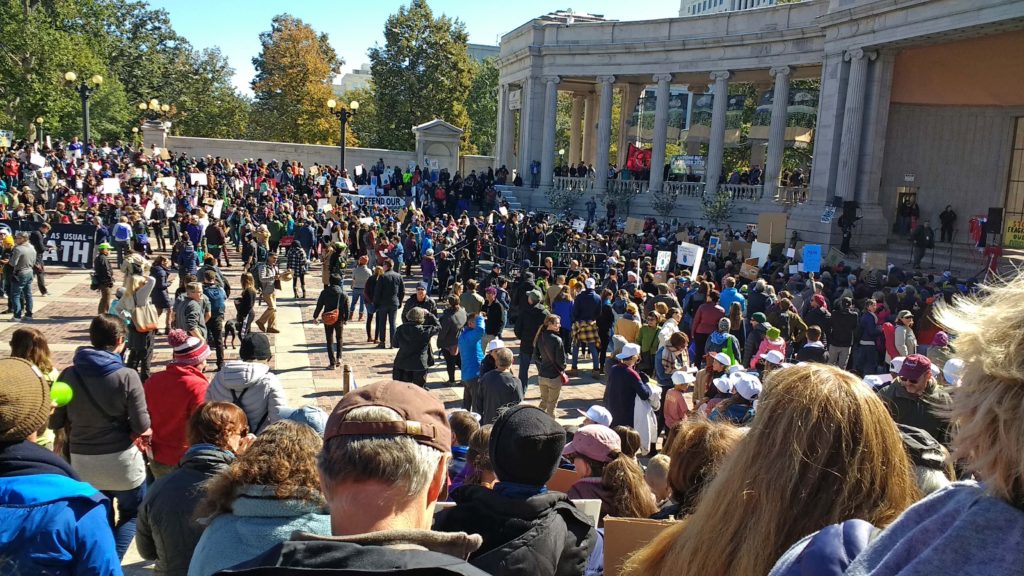 The point is to rally people to action. Since U. S. political leaders don’t even acknowledge that climate change is real, much less an emergency, there’s no point in worrying about a “plan of action” until it is acknowledged as a real emergency. We should simply disrupt everyone and anything that fails to acknowledge this. We need to get to “net zero” emissions, and then into negative emissions. “That rules out most of today’s politics” (p. 61).

If we follow this to its logical conclusion, and look at what it would actually take to deal with the climate crisis, it’s pretty radical. It means massive changes which involve a lower standard of living for the richest countries. It also means a pretty hard insistence on veganism, because that will start drawing CO2 out of the air, via reforestation on all the abandoned grazing land and cropland devoted to livestock. (Greta herself is a vegan.) Reducing or eliminating livestock will also bring down methane emissions (from cattle) which is the “low-hanging fruit” of climate change action and hold us back from dangerous tipping points.

None of this is even hinted at by even the most radical of our political leaders. Does Bernie Sanders say this? Do the Democratic Socialists, the Trotskyists, or even any prominent vegans say this? I doubt it. (The vegans talk about methane from cows, but I haven’t heard any talking about a lower standard of living.) Because of this, I endorse Greta Thunberg’s negative, obstructionist approach. It’s the most practical alternative right now.

At one point she underlines her statements about the urgency of climate action by asking rhetorically, “Is my microphone on? Can you hear me?” And then later, repeating some of the IPCC projections: “Did you hear what I just said? Is my English okay? Is my microphone on? Because I’m beginning to wonder.” And she concludes some time later, after saying that she is trying to wake people up, with: “I hope my microphone is on. I hope you could all hear me.”

Greta Thunberg says, loudly, what I’ve felt (and sometimes put into words) for years: if the planet is to survive, we have to make colossal changes to our society and our way of life. She doesn’t spell out that “we’re staring the collapse of industrial civilization right in the face” but what she does say is direct enough, and if you are familiar with the literature on climate change, it doesn’t take a lot of extrapolation to see where her logic is going.