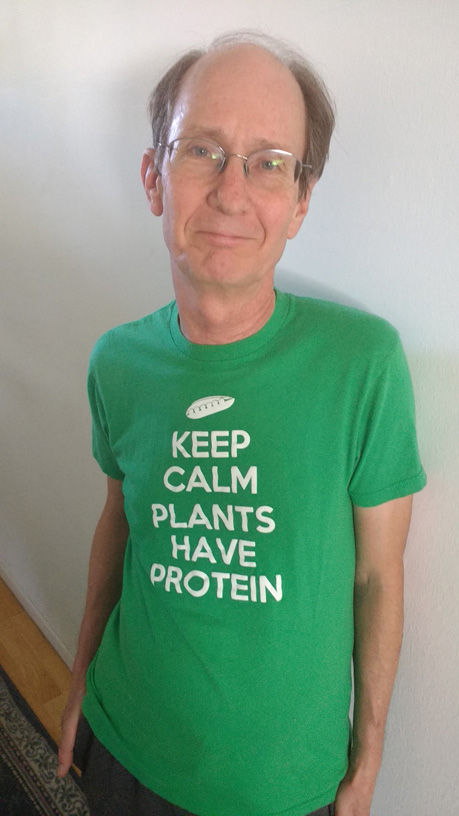 Vegans can become the voice of calm in this crisis by stating the obvious: plants have protein. There’s nothing “essential” about meat! This is blazingly obvious to vegans everywhere, but apparently unknown to most political leaders. We’re not all going to starve to death if we close the slaughterhouses.

There’s already quite a bit of political reaction on the slaughterhouse issue. A little over two weeks ago, a letter from 36 senators to the Vice President and other high government officials asked pointedly about protection for workers. The AFL-CIO is upset about workplace protections, saying that the Department of Labor had failed to protect workers. Representatives and senators have introduced bills to force OSHA to do this. A Latino civil rights group has proposed a meat boycott in Iowa (!) — “Meatless May” — to support workers in processing plants hit hard by the coronavirus. (In the 1970’s there was a “meat boycott” to protest the rising price of meat; it prompted some people to consider vegetarianism after the boycott ended.)

Moving towards veganism will aid in dealing with the virus:

1. Slaughterhouses are sickening workers. What’s the endgame for this strategy of sending slaughterhouse workers back to work in dangerous conditions? COVID-19 is extremely contagious (R0 = 5.7). Even if the rest of the country is locked down, and even assuming that those who recover from the virus are immune, this will be disastrous. Without any protections the coronavirus will continue to spread among workers until about 80% of them have gotten the illness and become immune—at which point, “herd immunity” would presumably start to work. If you reduced the R0 value to 2.0 with face masks or spacing out the workers, the virus would still spread but “herd immunity” would start to take effect at 50% of the workers immune.

So this could infect 50% or 80% of the workers? What kind of brutal, heartless policy would point to a particular group and condemn most of them to sickness and a certain percentage to death? We can show solidarity with slaughterhouse workers by boycotting meat.

2. We’re going to have to move towards veganism anyway. Because of the virus, red meat production is already falling about 20% to 40%. There are historical precedents: out of necessity, Denmark greatly reduced meat consumption during the First World War and Norway did it in the Second World War. And death rates fell as a result of these restrictions! (See A Vegetarian Sourcebook, 1993 edition, p. 51.)

3. The factors which increase mortality in COVID-19 patients are exactly the things that can be treated or reversed with a vegan diet. People who suffer from obesity, heart disease, hypertension, type 2 diabetes, and so forth are affected much more severely and are much more likely to die from COVID-19.