Any other book titled The Vegan Revolution, if one didn’t look at the subtitle, would not necessarily seem to have anything to do especially with Judaism or Israel. But from page 1 forward Richard Schwartz starts talking about why Jews should be vegans. Surprise! The title is accurate. He really is talking about a world-wide vegan revolution. The vegan revolution taking place in Israel and among Jews is, in effect, the model for the world-wide vegan revolution. Judaism and Israel just provide the spark. END_OF_DOCUMENT_TOKEN_TO_BE_REPLACED 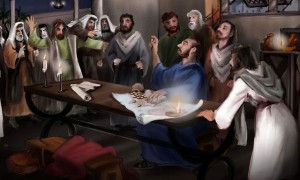 There’s a point in A Polite Bribe when we approach the dramatic confrontation between Paul and Peter at Antioch. Paul thought that he, James, and Peter, had a deal: the message of Jesus could go to the gentiles. But in Antioch Paul is furious that Peter has betrayed this agreement, and denounces Peter to his face. END_OF_DOCUMENT_TOKEN_TO_BE_REPLACED

Moreover, it’s a movie that makes some critical points about the history of the early church. There was a split in the early church between Paul and the Jerusalem church. Paul made a collection for the church in Jerusalem (Galatians 2:10, Romans 15:25–27, etc.). This collection was likely refused by the Jerusalem church. Whoa! What was this all about? END_OF_DOCUMENT_TOKEN_TO_BE_REPLACED

Well, surprise, surprise! According to a recent archeological report, the ancient temple in Jerusalem was a slaughterhouse that powered the local economy. The animals sacrificed came from both near and far away, which “confirms visions of the temple depicted in historical Jewish texts and suggests the economic heart of the city was its slaughtering operation.”

The Journal of Archeological Science, in the December 2013 issue has an article on “The pilgrimage economy of Early Roman Jerusalem,” by Gideon Hartman, et. al., which (despite the date) is evidently already available. You can find the abstract online (scroll down to see abstract). What is new in this report is not the ancient testimonies pro or con on animal sacrifice, but that modern evidence supports the idea that animal sacrifice was a key part of the first century Jewish economy. END_OF_DOCUMENT_TOKEN_TO_BE_REPLACED